In reading this New York Times Business bestseller, It’s Your Ship (Management Techniques from the Best Damn Ship in the Navy), I was impressed, reminded, and educated on techniques for both management and leadership that I felt inspired to share with my PSA family.

In a bit of background, the ship’s namesake, Edward C. Benfold, was a Navy hospital corpsman, who died in action at the age of 21 while tending to two wounded Marines in a foxhole during the Korean War.

Captain Abrashoff’s story, is of his commanding the USS Benfold for 20 months starting June 1997, and ultimately making the ship the best in the fleet after the former officer leaves command.

Captain Mike took over a command where the crew was dissatisfied, frustrated, displaying overall poor morale, and just “buying their time” until they could exit from the duties of this ship.  Knowing he had his work cut out for him, Captain Abrashoff was unafraid to try leadership methods others, before him, had not employed in recent times.

Firstly, he wanted his crew to display courage, and step up to the plate, just as Edward Benfold, the ship’s namesake, had done.  Captain Abrashoff had no real money to hand out in raises, no stock options to provide, so in an initial attempt to deal with poor morale, he decides to deal with his unhappy sailors’ top 4 gripes:

He began with the idea that there is always a better way to do things, so…

He evaluated every process on the ship, asking everyone is there a better way.
He implemented processes that people would enjoy carrying out.

This captain saw it as “it was his job to create the climate that enabled people to unleash their potential.” He believed that given the right environment, there are few limitations to what people can achieve.

Captain Abrashoff conveyed that the “difference between thinking as a top performer and thinking like your boss is the difference between individual contribution and real leadership.  Some people never make this leap”, the captain shared.

“You have to train yourself in leadership, you can’t afford to wait until you get promoted to begin the process.  While you’re still an individual contributor, learn to think like your boss, so when the day comes to be a leader, you’re ready to step right in…”

“Lead by Example”, he said.  “Never forget your effect on people.  No one follows a leader who lies.”

He points out that it’s funny how often the problem is you…He reminds us to evaluate:

In these pages, Captain Abrashoff reminds us to realize our influence, and use it wisely.  “Be there for your people.  Find out who they are.  Recognize the efforts you have on them and how you can make them grow taller,” he shares.

In another key point, he prods us to listen aggressively!

The captain goes on the point out the importance of making sure your crew understands the vision and why their job is important.  In doing so, you will help to create a climate of trust.

Subsequently, he describes the importance of looking for results, not salutes.  He articulates how taking calculated risks and going beyond standard procedures is key. 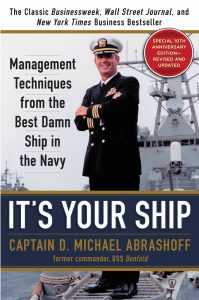 In a particularly fun and interesting example, the Captain explains, “Don’t fight stupidity, use it!”  In this case, he had taken a tough (and seemingly stupid) restriction on his crew to get shore leave, and turned it into a two-sided benefit.  As a result, many on his crew strived to complete this difficult program certification, attained pride in their ship…and got the much coveted shore leave.

Most importantly, he believes that knowing and building up your people is key.  Generating real unity and actually being able to improve your people’s quality of life are the outcomes and rewards of this kind of an investment in your people.  And, as a natural progression of these efforts, greatly increased performance is the end result…

In summary, Captain Mike advises us that “the most important thing a captain can do it to see the ship through the eyes of the crew.”

There are so very many great “nuggets” of leadership information tucked in these pages, and I would highly recommend you read the book should time allow, but I hope this little teaser summary gave you a flavor of the depth of leadership knowledge in these pages.