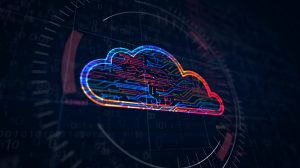 No, we are not talking about those white fluffy things floating overhead – although sometimes we think that data stored in the Cloud is somehow floating overhead, high in the sky. The Cloud has been used in many ways when it comes to both technology and storage. In the IT world, companies have been using the Cloud to keep databases, store information, and even run software systems, within the Cloud environment. In the personal world, many phone companies use the Cloud to store photos, data, music, and much more for their customers. But when it comes to security, both cameras and access control systems, do the same principles apply? The answer, in short, is yes, once you have observed some of the pros and cons.

There are many pros to moving toward the Cloud when it comes to security. It is important to highlight these pros when dealing with an end user who is leery of moving their existing setup, or installing a new system, onto the Cloud. One of the main benefits of Cloud-based systems and Cloud-based storage is the lack of hardware needed for such applications. This not only provides a lower up-front cost but also provides advantages to local footprint on site. Because the data is all stored on servers, not on site, there is no need for the hardware to be local, taking up closet and rack space that could be better utilized. All data is backed up and stored, in many cases, not on just one machine but on several. This brings us to the second pro of Cloud use, the Cloud produces an effective solution for redundancy and disaster recovery. Many Cloud mangers such as Amazon Web Service (AWS), Google and Microsoft with their Azure offerings, provide redundancy. This means that in the event one server should fail, there is another server, multiple servers, in fact, to step in allowing for little to no downtime for your systems, backups of recorded video, and databases. No longer are you relying on a single server. If a hard drive fails or system crashes, you are not left with an inoperable system. Most end users would not even recognize that an issue had occurred. With these servers being managed by others, another key benefit for Cloud solutions is the time and effort it takes to roll-out updates. Things like Windows updates and software updates are managed by the Cloud service. You no longer have to take the time and effort to log in to each individual machine. Your system can run with the latest versions and features provided, as well as security patches and updates automatically.

The Cloud also brings with it some negative aspects. While upfront the cost of a Cloud-based system will be lower, there are times when the cost of the Cloud-based systems and services are more expensive. The Cloud, when it comes to security, is a subscription-based process. You are paying monthly or yearly based on the services you are using and the amount of space you need on a server or system. For instance, in a video atmosphere, you are typically paying by the number of terabytes you need for the desired amount of recording retention. In access control, you are renting space to host your database and software on the Cloud server. Like renting an apartment with a lease, there is no ownership involved with a Cloud-based system. Because of this, years down the road you may be paying for the same system you could have just owned, if purchased outright. Factors such as longevity of the system, overall cash flow, and end user needs, will provide better information as to if this cost makes a difference. Another con to the Cloud-based systems is the need for internet connectivity. We stated in the pros that Cloud servers have an unlikely chance of complete failure, but local internet is not always as reliable. A down internet connection in today’s world has a much larger impact on a business than it did in the past. With analog phone lines disappearing, business switching to VOIP (Voice over IP), email exchange servers, and other day to day activities, if an internet connection goes down it can halt business. The same can be said for security systems on the Cloud. While in the case of access control, depending on what platform you choose, your system may function with little issues, the ability to update or change any programming will be lost. Updated card holders, whether removing or adding, will not be able to communicate to the boards without the established internet connection. In the case of video, if you are recording to Cloud servers, you will not be able to save those recordings. On a side note, this is why SD cards or some other local storage would be highly recommended in case of failure. While today’s connections are far better and more reliable than DSL, it is important to recognize the importance of the connection to the security systems, so as to not leave a customer at risk for intruders, or be unable to retrieve video, should any issue occur.

These items listed above are only some of the pros and cons of investing in a Cloud-based system. Asking the right questions to your customer is going to be key to determining if the Cloud is a place they want their security system to reside. As we look to the future of technology and security, the Cloud will play a larger role in how these systems function. Security Integrators would be wise to know and understand the Cloud and how it impacts the security industry, both with new installations and in upgrading existing ones. More and more, we will see a shift from on-premise servers managed and controlled by IT departments to reliance on servers somewhere in the sky, the Cloud.